Team Talk: you get to see a side of London you wouldn’t experience as a tourist

Declan Clear joined the crew in May 2018 and then started working in the office as Duty Manager earlier this year. We caught up with Dec on his lunch-break at the office for a skate and a chat by HQ. Dec told us about enjoying the crew life in London while being here on a two-year Visa from Australia – building up his professional CV while having the freedom to travel around.

I had two interviews planned on the same day and I picked Connection Crew over the others. I knew that I was looking for crew work and Connection Crew stood out to me. I wanted to be involved with a company that helps the community. When I was applying here, it felt like you wanted to get to know me, I didn’t feel like a number – that’s what stuck with me.

My friends and family back home are happy I’m doing a job I enjoy but they’ll be like ‘what is it you do again’? Because one day they’ll get a photo of me on a construction site and the next from a fancy restaurant.

Working at [a certain celebrity nightclub] is a crazy experience. Such a fancy venue in London and so iconic as well. The jobs can be pretty epic. On this one night-shift we had to work in silence because the neighbours would complain if there was any noise whatsoever. There were hundreds of flight cases outside and all these trucks and everyone was whispering to each other. Madness.

I quite like the unusual jobs – I spent a week working in the Connection at St Martins [our founding charity] once. It was cool being inside a charity and seeing how it operates. It’s mind-blowing seeing the people who work there – they really do care.

I also like the big jobs – having a beer at the end with the guys. Getting out of a big venue on time, all that equipment, everyone pulling out all the stops to get the job done. You feel a sense of pride when you see that truck close the doors and pull away – you feel like: ‘Yes! We’ve done it.’

Breaking down an entire concrete skate park three times faster than the other team was a proud moment. I was quite new to chief-ing jobs. There were 18 crew and it was myself, another chief and the client running it. We had masks, safety goggles, sledge hammers, jack hammers, crow bars – and we ripped this entire park up in about 11 and a half hours. The client came up to us and said the American team took 3 days to do what we did!

For me it was about making sure that everyone was happy and safe, working at speed but still getting plenty of water… making sure all those parts fit together was hard but we got it done.

The hours can be tough, but you do get used to it – and having weekdays off is nice! You can have a day out. Planning you’re schedule for breaks and trips away is cool – a perk of being freelance. The app is great for planning your time and saying yes and no to job offers.

You also get to see a quieter side of London. It’s cool. You get to see London when it’s not crowded and busy. We work at the Underglobe at the Globe Theatre, sometimes you finish at 3am … looking out over the Thames in the middle of the night, walking over to a night café between shifts is cool because you just wouldn’t experience that side of London as a tourist.

Leadership is a core skill I’ve learnt that will go on my CV. If you want to go into management of any kind or climb any ladder in any industry you need to be able to run a team. The exposure I’ve had to that has been really interesting and really useful – and enjoyable too!

Now I’m working in the office I can ride my skateboard to and from work. I’ve contemplated skating to site but it’s kind of hard in your steelies! 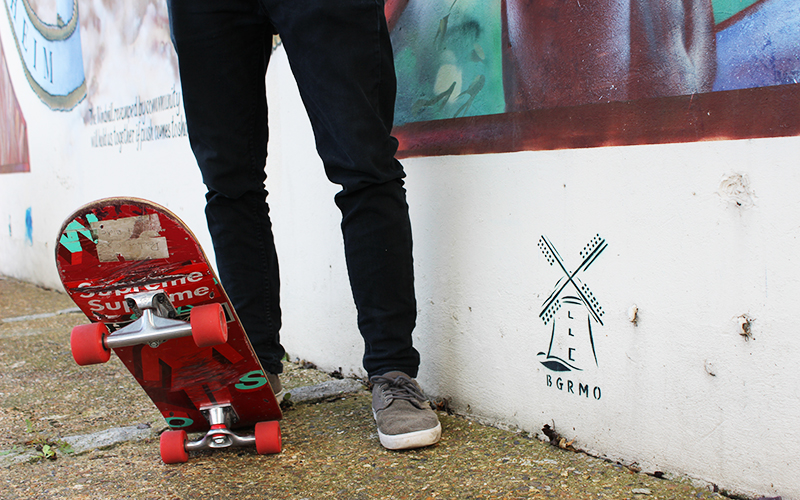