These are tough times, but Connection Crew is open – for now and for the future. Read more

Jack worked with Connection Crew a few years back (pictured above) – we caught up with him to find out more about life on the road, second chances and how crewing helped him create a base for a bigger career.

Jack had already been touring before coming to work with Connection Crew, but he ‘did something very stupid’ and got fired. So he came to Connection Crew to build his industry knowledge and experience before giving Stage Management and touring another go. It seems to have worked out!

What’s a typical day on the road? As a stage manager I am responsible for the safety, the timing and the show at any venue we are at the time; To make sure the show comes together from a production stand point, whether its two trucks or 20 trucks. A typical show day will start at 7am and end at 2am – a 19 hr day. It’s a very long day!

Was this where you always thought you would end up? I’ve only got 5 GCSE’s, then again some people have university degrees and still fall on hard times. Anyway, I always knew that I didn’t want to sit behind an office desk. So I thought I would try and be a stage manager in the music industry, because I knew a couple of people that were in that sector. I am not very technically gifted but I’m very practical, so that’s another reason I wanted to do this. And you can earn very, very good money from doing it, which is obviously a drive as well!

How did you get into crewing in the first place? Well, by the time I came to you guys, I had already been touring, but I’d been fired because I did something very stupid. So I started crewing with you guys to gain a wider knowledge of the industry, especially the corporate side, and to widen my skill set. Previously I had been a sound technician and working with Connection Crew was very helpful because I learned a lot more about staging, about AV and lighting, and about the general logistics of crewing. My expectations at the time were to build some connections within the London industry – which did happen.

What are some of the things that you learnt at Connection Crew that you still carry with you now? I still use a lot of staging aspects when we are building stages for Queens of the Stone Age. Techniques of carrying deck for example. But the main lesson is in problem solving, because, with all due respect, in the corporate world, when they come up on an issue they usually throw money at it. We try and fix the issue without spending money and sometimes we are successful and sometimes we’re not, but you know, at least you tried right?

What values have stayed? What values have changed? When I was working for you guys I was doing my best to get noticed, which is important. It’s just about doing the best you can do at any given moment and not accepting second rate work.

And if you could do it again what would you do differently if anything? I don’t really know to be honest – I’m pretty happy with how it all went!

What would you say to someone starting out now? Nothing should be below you if you want to progress. And even now with the stage hands, sometimes I will have fifty stage hands but I will still do exactly what I ask them to do, because you have to lead by example. Anyone starting out should also know that you need to sacrifice a lot if you want to progress to this kind of level – but it’s worth it.  And if you’re going to do it, commit to it, don’t do it half hearted. Full. On. Commit. Work as hard as you can, as many hours as you can. And on site – don’t be the guy that does something without any directions. “Don’t freelance!” Which I use all the time – by that I mean working without direction not being self-employed. Just ask, ask questions, people don’t mind questions!

What would you say to your younger self? Don’t drink as much probably! (Laughs). Don’t waste opportunities when they are given to you. I mean I am very, very lucky to be back touring. I didn’t kill anyone obviously (laughs) but I had too much fun and got into trouble and then got fired. Plenty of people have been fired for having too much fun! That’s why I ended up working back for you guys – I was given an opportunity and I took advantage of it and at the time I didn’t realise the potential of where it could have taken me.

3. Arrive at the venue

4. Then we do a ‘walk talk’, which means walking around the venue looking at everything and all the variables that each venue provides

5. Then put chalk marks on the floor – that is where our show is going to be

6. Then we’ll unload the first truck which is always the rigging or lighting

7. Then it’s time to delegate some local crew to the lighting guys and let them do their thing

11. Hopefully, by about 2pm we will have started doing a line check – that is testing all of the audio lines to front of house

12. After that we do a sound check with the band

14. The doors open at about 7 o’clock and then the support act will go on stage

16. Then we will have the main act

18. If all goes well we’ll probably finish at 1am

Interested in building a career in stage management? Find out more about working with Connection Crew.

Here’s Jack nowadays, a tour van selfie at the start of a long day. 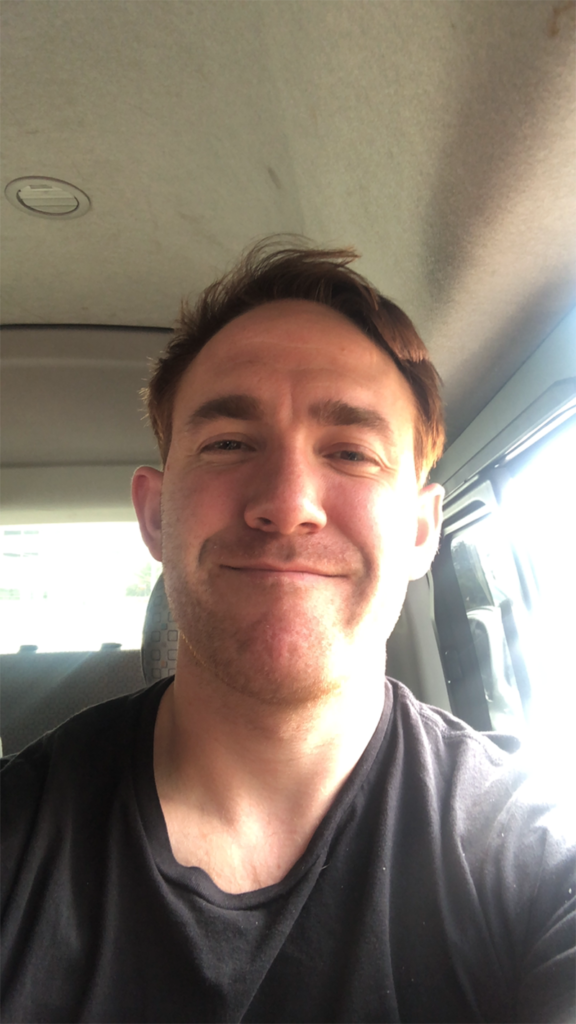